Clovelly to Tenby (via Lundy Island) 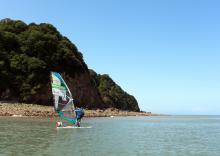 Sailing round Britain has so far been one challenge after another. The technical and physical challenges are there, and these ebb and flow. But it is the mind that is a trickier beast to tame and the psychological challenges are also more insistent and intrusive. And as difficulties are overcome the satistaction is short lived as the next hurdle looms in to clear focus.

Crossing the Bristol Channel has been a particular challenge that has played on my mind since the planning stages of the expedition. Up until actually getting in spitting distance of taking on the crossing, my concerns had been held at bay by the preceding barriers occupying my thoughts.

At Clovelly (North Devon) I met with good friends Ian and Bella, and my brother and family had headed up to complete the party. It was lovely to see them all but my mind didn't permit me what should have been a relaxing stop. Preoccupied with forecasts, tides, alternative route options, anything and everything that could go wrong, I struggled and failed to find a sense of calm.

In the end, the setting off settled my mind and brought a sense of focus to the job in hand. The rational side of my brain prevailing.

Part one of the crossing was a short hop of about 14 miles, to Lundy Island. Ian and I had sailed to Lundy before, so this was familiar territory. Still, the wind was fairly solid and the waves in the channel between Lundy and Hartland Point were solider still. Lundy was visible but disappeared in every trough. The wind with tide conditions prevented a more developed sea state and meant that there wasn't much whitewater. Conditions were, in the final analysis, fine. Just. I was also sailing on a tight reach, which is easier to control than sailing broader. The final mile and a bit I sailed upwind into the swells, that were smaller in the lee of the the island. My second arrival at Lundy was every bit as good as the first.

Many thanks to Emily and Mike who made me welcome and put me up in a very spacious and well appointed tent.

Part two began with breakfast (coffee and cup-a-porridge) at 4:15am. Grimy weather forecast for later in the day onwards suggested that an early morning dash would be my best chance of moving on for the next few days.

Conditions looked fine. The flag above Lundy's church was gently waving. By 5:30am I was sailing.

The wind was from the south so I was reaching as broad as possible. Pretty wobbly initially as there was insufficient wind to fully plane, but making reasonable speed surfing down the waves. The sea state got very confused to the north of Lundy, then I realised I was in a tidal race as I went through a section of far better organised standing waves. It is surprising just how far the races extend - I hadn't really considered I would be affected this far from the island. After the race the sea was flat calm for a while and I could plane in the harness: welcome respite.

The sea returned (although thankfully smaller than the previous day) and the wind filled in. Sailing was more comfortable going with the waves so I stayed mostly on starboard tack. At half distance I saw some dolphins breaching. Not long after I saw land and could make out Worm's Head, off the Gower peninsula. Comforting.

Conditions were in control but testing enough to make eating and navigating on the go difficult, so sometimes I would head up a little to make it easier to go through these basic checks. Sailing broader there was the occasional nose-burying incident when I misjudged my line through the lumps, but with the wind only at about force 4 the decelerations these produced were manageable (plus carrying the barrel gives a bit of extra 'punch' to power the board through).

I had no intention of stopping on (or going near) Rhossili beach which would have been picking up plenty of swell, so gybed off towards Tenby. Land ahead became visible some time after.

When the coastline started to match what I thought I should be seeing, I changed my GPS waypoint to Milford Haven. The approaching clouds and my recollection of the forecast made me cautious though. So when the wind picked up a notch I changed plan again and decided to consolidate the crossing by heading onto a beach on the sheltered side of Caldey Island. Although it seemed a shame to 'waste' my upwind advantage I was pleased with this decision when just ten minutes later heavy rain and thunder commenced.

After the rain eased and I still failed to spot any monks (Caldey Island has a monastery) I headed over to Tenby and met up with friends I have in these parts from my days at Swansea University.

The forecast grimy weather has kept me here for a couple of days but I am making use of the time for planing, maintenance (new race vario harness lines - my preferred type - from Neil Pryde; thank you Chris from Agenteight), and buying a few things (additional clothing in preparation for heading north).

After successful and controlled crossings to and from Lundy my mind is in good place for the next stages. I feel a little bit guilty about a two day break here but it is mostly forced (by weather) and if a crossing to Ireland is on the cards soon - which it may be - I would prefer to take that on well rested.