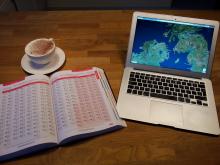 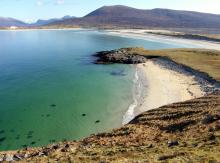 Jono left the Essex seaside town of Clacton on Sea on 7th June, and six weeks later has reached the eastern coast of Northern Ireland. In the next few days he will make the short sea crossing to Scottish waters. It’s unlikely that anyone will bother to measure exactly where the half way point is, and therefore no-one will argue when I announce that he’s sailing across the half way line just about… now. Congratulations Jono on a job half done!

In those six weeks we’ve heard a lot from Jono about his intrepid, solo adventures. There was his epic ‘Battle for Dover’ just a few days after the start, when gale force winds forced him to seek shelter among the channel ferries. His yet-to-be-beaten 181 km, or 112 miles, day blasting down the coast of Kent, East and West Sussex, a rescue of a sinking speedboat in the Solent, a horrendous rounding of Land’s End, alone in big swell, mist and swirling currents. There’s been sailing with dolphins, fighting off an attack by giant squid, a second crossing to Lundy Island - and on across the Bristol channel, and of course the first ever solo, unsupported crossing from Wales to Ireland by windsurfer.

I suppose it would be nice to hear from Jono directly at this landmark point in the voyage, but he’s plodding north in heavy rain right now, so instead I’ve decided to share some details about the vital, dangerous and difficult role of shore support, as carried out by Jono’s brother, (by coincidence the author of this blog post.)

It’s fair to say without shore support there is no way Jono could have got any further than Brightlingsea (five miles down the coast from the start point of Clacton pier). It really is that important. Of course, if Britain’s coastline had a reliable 4G signal, and Jono had bought a decent smartphone, he probably wouldn’t have needed shore support at all. So what does it actually entail?

Armed with a copy of the Reeds Nautical Almanac 2015, Google Earth, a large cappuccino and an ‘A-Z roads and motorways’ wall chart of the British Isles, the role of shore support entails being on hand at all (most) times to answer the phone and help with such questions as:

“There’s a big rock ahead, can you look on Google maps and see what it it?”

“Can you look in the almanac and tell me what it says about the tidal flow around XXXX?” (where XXXX is some fearsome headland or another). This type of question is usually followed by:

“Don’t try to interpret it because you don’t understand the abbreviations, just read me what it says.”

Yes, it’s quite fair to say that without good, reliable shore support Jono would be in a lot of trouble a lot more often than he already is.

So with one half of this epic journey already completed - what is Jono likely to face over the next one-thousand-odd miles of British coastline? Well, once he makes the crossing into Scotland he will immediately be among the lochs and islands of the Hebredies. For most who have sailed around Britain, this stretch is the highlight. The waters are sheltered, crystal clear and backed by high mountains. The beaches are pure white sand, empty and perfect. There are still dangers, the tides flow fiercely through the narrow channels and gaps, and there are strange anomalies such as Corryvrechan - a tide powered whirlpool which is like a roundabout in the sea. And the seals are really big here.

The north coast of Scotland is no picnic (although ironically it’s lovely for picnics). The west corner is guarded by Cape Wrath - they wanted to call it Cape Fear but Martin Scorsese had copyrighted the name. The east corner boasts the fastest tidal flows in the UK - up to 16 knots at its worst. If he makes it past all this he has to face another major crossing, this time over the Moray Firth, known for its thick fogs, before he gets onto the homeward stretch, down the Scottish and English east coast, around the bump of East Anglia and on and on until the beautiful sight of Clacton’s pleasure pier comes into view.

But all that is yet to come. For now I just want to say a massive, huge well done to Jono for getting this far - I can honestly say I don’t know anyone who thought you would. I’m raising a beer to toast for better weather and fair winds for the rest of the voyage. Halfway round Britain is an awesome achievement. Now stay safe and finish the job.