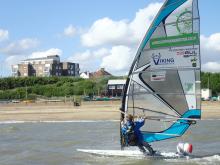 He did it! Yesterday Jono completed his circumnavigation of Britain, unaided, alone, by windsurfer, the first person ever to achieve the feat. He becomes the fourth person to make the 2000+ mile journey by windsurfer, but the only one to have done so carrying all their own gear, the only one without a boat following them around in case something went wrong.

A good crowd gathered on Clacton Pier to watch Jono beat up against a stiff breeze in the late summer sunshine, and many more watched on the tracker as he cruised the final few miles from Felixstowe, a distance of about 20 miles. It was a perfect, easy finish to an amazing journey.

Along with Clyde Waite, I joined Jono on those last 20 'easy' miles. We were dropped off with our raceboards and 9.0 sails early yesterday morning, in moderate winds and drizzle. We took water on our backs but none of the camping gear Jono takes in his barrel (he calls it his caravan). The sea looked brown and confused, a small but feisty shorebreak was lumping onto the shore and garish painted container ships eased past just offshore. The Naze headland, our first waypoint, appeared and vanished as the visibility faltered. We rigged nervously.

Jono appeared from out at sea and planed into the beach, that now-famous blue and black sail adding colour to the grey seascape. He’d set off earlier a few miles further north, where he’d spent his last night in the company of kind strangers who’d been following his adventure - this time the Felixstowe Windsurfers Club. There was a brief reunion - it was the first time I’d seen Jono since Devon, in the meantime he’d windsurfed across the Bristol Channel, over to Ireland and back, around Scotland and all the way down the east coast. Then he said “The conditions are perfect, let’s get going.” We punched through the shorebreak and set off.

A few minutes later I was out of breath. Jono’s perfect conditions were force 4-5, the wind dead against. The tide was flowing against us too, and set to get stronger. The massive sail needed a wide grip and constant, forceful resettling as angry chop knocked the board from its upwind track. Gusts threatened to lift the board and dump me in. My backpack slapped into the waves. Spray knocked back from the board’s nose constantly and smashed me in the face. I looked behind, I’d travelled maybe five hundred metres.

An hour of fighting later and we’d travelled a third of the day’s distance. On the tracker it looks a relatively straight line, what you can’t see is the extra tacks we had to do to beat the tide. The tracker only takes a position every ten minutes, so it’s constantly smoothing out Jono’s line, meaning it underestimates the distance Jono has had to sail. I didn’t know that until this morning.

I was hanging on. I’d sucked most of the water from my backpack and my legs were cramping up. Clacton pier seemed unimaginably far in the distance. I just wanted to go ashore and rest, but the tide had us behind schedule so we kept on. The wind dropped a little but this made things harder, instead of locking in to the beating straps, you had to keep jumping forward to keep the board moving steadily through the waves.

We beat up the coast, an inshore tack within yards of the beach to sneak one over on the tide, an offshore tack a half-mile off, a wobbly moment each time to reset the camber inducers on the new side. Walton Pier appeared as a thin line ahead, buildings and pillars growing clearer as we neared, then it passed astern and the Frinton flats were the next landmark, familiar features for Jono as he grew up sailing these waters.

We’d arranged to stop at Holland Haven to regroup, and finally, after what felt like many hours of brutal sailing, I could make the beach on the next tack. I can’t operate daggerboards on longboards so I flopped in and manhandled it up, then dragged the gear ashore like a shipwreck victim. I was destroyed. I’d have happily called it a day there, but were were still three miles from Clacton Pier. Jono had to finish this thing.

The coast bends around a little, making the final approach to Clacton pier a little less on the nose. The sun was blazing now, the wind solid again and we tried to keep in formation for the final stretch. As we approached the pier we could see a crowd of people gathered watching out for Jono. We could hear the air horns, see people waving and cheering. I’ll leave it to him to say how that felt, but it was a great moment.

Finally on the beach, our destination reached and I just wanted to lie down and sleep. I’m not exactly unfit, but I was totally exhausted. I could hardly stand up. Later I asked Jono how hard today was compared to his normal day, and he graciously said it was a bit hard because of the tide, but didn’t really feel long. I’ve compared our track together to his ‘average’ day. It was nothing. Barely a half-day in his round-Britain marathon.

This morning I’ve needed two strong coffees to write this. My muscles feel bruised. I reckon I’ll be ok in about a week. Jono’s checking the forecast saying this week's gales look interesting. He’s going to fix the dings in his waveboard later this morning, after the BBC man comes to interview him. To say I’ve got a newfound respect for his achievement is an understatement.