On the move again 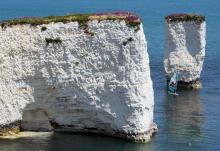 Your update today comes from the shore support team and is a bit rushed as I'm also trying to pack to go on holiday first thing tomorrow morning (not the best planning for shore support I know, but it was booked before Jono announced his crazy adventure).

Anyway, after a two-day maintenance lay-off Jono is back on the move. It probably would have been one day had my tools been a) better organised and b) better but I've got more important things to do than put things back in their boxes. What's most relevant here is that the barrel carrier system is now simplified and considerably stronger. Jono has also had a haircut which let's face it was much needed as from this point on he's relying on the kindness of stangers for places to sleep and food, and looking less like a yeti can only help with that.

Today was planned as a relativly short run, from Southbourne to Kimmeridge in anticipation of a more difficult day tomorrow. First he needs to get past the Kimmeridge firing ranges before they open at 9.30. It is possible to go around the ranges, but this means detouring six miles out to sea. It's also possible to go through the ranges when they're open, but this involves dodging live shells being fired by trainee TA soldiers. They wouldn't actually be aiming at him, but by definition they havn't got the hang of their enourmously dangerous guns yet, so it's best to keep out of the way. He needs to be safely past Lulworth Cove by 9.30. Coffee on the beach at Durdle Door then.

After that he's due to tackle one of the genuinely most dangerous parts of the entire journey, sailing around Portland Bill. In spring tides this creates severe and very dangerous sea states (according to the Reeds Nautical Almanac). Even in settled weather it should be carefully avoided by small craft, it goes on. Naturally it's spring tides tomorrow. There is an inshore route between the 'races' which can be taken during a brief time window which opens around 1pm tomorrow. If he's not in place and ready to go around at this time, he'll have to wait till the next day.

Hopefully he'll be fine, but rather him than me. I expect they'll be a report from the man himself either pre or post Portland. He's having a BBQ at Kimmeridge as I write this (before camping down for the night).

The photos here are from a brief sail-through at Old Harry Rocks, one of the more beneign landmarks along the South Coast route, sheltered from the worst of the tidal races and winds by Swanage.