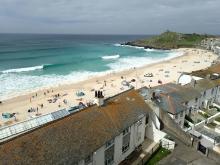 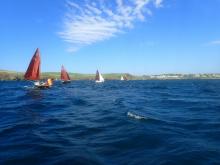 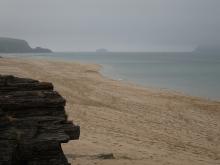 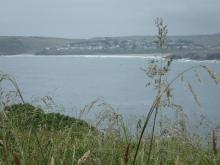 A brief update to explain recent pause in progress.

After a recovery day post the trauma of Land's End progress to Padstow was fast, although strong and gusty offshore winds forced me to sit out a few hours at Portreath until conditions became more manageable. The waves at Portreath were thankfully quite small but getting off with an expedition loaded raceboard isn't exactly easy, so when I did make it our between sets it was with a sigh of relief. Bad timing could easily damage equipment so these are delicate moments.

I planed most of the way up the coast and finally saw my first dolphin off Newquay. Dolphin was heading south though, so this was a most fleeting glimpse.

Saw some nice sailing boats heading into Padstow. Still quite windy and swelly so was impressed at how game they all were.

Had intended to get off the next day but some prudent research by press man and unofficial navigator Gregg helped change my mind on that. Gregg pointed our that on a big swell there is literally no stopping on this stretch until past Hartland Point, and the swell at Bude was 6 - 9ft (or in non surfer parlance 'pretty darn chunky'). That meant next safe stop was 75km away, and with very light winds that just wasn't realistic.

Poor visibility and thunderstorms during the day confirmed this decision to stay put as the right one.

Today is a similar story - although the swell has dropped off there is still no wind and light drizzle.

I am upbeat for tomorrow though. Swell is set to be much smaller and there is decent breeze forecast from the SE.

Early start on the cards for tomorrow.