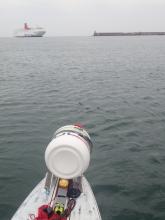 Now I'm making my way up the east coast of Ireland (albeit at a leisurely pace these last two days of very light winds) the crossing from Pembrokeshire already seems a long way behind me. I doubt I'll be doing it again in a hurry, so here are a few notes on how it unfolded.

Having crossed from Lundy to Tenby, I'd been holed up in Swansea with friends, letting wet and windy weather blow through. Checking forecasts at every opportunity, Friday seemed to be the day when a crossing to Ireland might be possible. Target then was to get in position and be ready by then.

This I acheived, just, but it required some longer and more tiring days than I'd bargained for. Tenby to Dale was a nice sail, but I'd had to leave it late to allow MOD firing to finish before entering the range at CastleMartin, and battling against the tide on a dying headwind made getting past the headland at Freshwater West - past the range - very slow. It was a relief to get into the Milford Haven opening before nightfall.

Next day was basically windless but once outside Milford entrance I had favourable tide. Timing was just right to hit Jack Sound with good flow running, which isn't what the navigation books suggest but certainly gets you through quickly. With no wind sailing wasn't really going to happen and the board got spun around like a pooh stick. I let myself be washed through with the sail in a half-uphauled position.

More worrying was crossing St. Brides bay in a very light wind with the threat of being becalmed miles out to sea. Some people in A RIB from Skomer island (who'd seen me being washed through Jack sound) came to see if I was OK. They suggested I head to Porth-Clais, just east of Ramsey Sound, which is what I did. I saw hundreds of puffins.

Porth-Clais is a beautiful little spot, but there isn't much there, so when Local Contact Dave turned up and offered me a place to stay I gratefully accepted. Dave and his parents did a fantastic job of preparing me for the crossing. Charts were pulled out, almanacs dusted off and strategy mulled over. Hearty meals consumed.

At 10am the next day I set sail from Porth-Clais in a fresh south-easterly. Ramsey sound had mildly concerned me but was a pleasure to sail through in this breeze. I then made good progress round St David's head and up the Welsh coast, looking for a better (slightly less broad) angle to head to Ireland.

After a few miles the angle looked better and I gybed then headed out, sailing as broad as I could. Conditions were perfect and I made great progress for the next hour and a bit, covering 15 or 20 miles. The thought had entered my mind that this was going to be almost too easy. Then wind then dropped to very light, and never returned.

The next 6 hours had an uncomfortable tension, always with the concerning thought that the wind may switch off completely, leaving me out at sea in the dark. With no land in sight, little feedback from the sail, and a lumpy and random sea, it was easy to become disorientated. Without GPS it would have been very easy to sail in completely the wrong direction.

Eventually what I thought was a sail came in to view. Later I correctly identified the feature as a lighthouse. Pleased to have a reference point I headed straight at it, thinking land must be near. [Subsequent research have informed me that this was Tuskar Rock lighthouse, 11km out, and that the rock in question has "probably destroyed more ships than any other Irish coastal feature".] As I neared the lighthouse I saw white water extending well to the north, which is where the incoming tide was taking me. At about this time the skies greyed, rain drops fell, rolls of thunder echoed, and the wind dropped to practically nothing (and for good measure swung to become more "on the nose"). I still couldn't see land and doubts crept in to my mind about the accuracy of my waypoints. I checked my phone's Opencyclemap map for lighthouses in the middle of the Irish sea and couldn't find any (doubt it gets many cyclists anyway).

Fortunately the stormcloud and the worst of the overfalls both passed to the south, and the wind returned. That was as bad as it got. The wind swung back to the south and returned to the minimum required to avert more serious anxieties. Within an hour land came into view, my navigational concerns eased, and there was a noteable improvement in the sea state.

Land took a long time to get close, and I wasn't about to congratulate myself before the job was complete, but once satisfied the wind wasn't going to desert me I allowed myself to enjoy the last mile cruising up to my destination waypoint - the small fishing harbour just to the north of Rosslare's main ferry port.