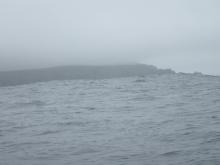 I'm taking a day off today. Safe on land. Yesterday I windsurfed around Land's End. The tracker plots a nice yellow line around the coast: job done, tick.

The reality is that this was a day of sustained fear.

I'd slept fitfully, anticipating the challenge ahead, listening for wind and rain. Conditions looked OK. Wind, but not too windy. Visibility was poor in the morning drizzle but set to improve in the afternoon. The words of the merry skipper who had pulled me up the wall at Porthleven replayed through my mind. He'd become sober and serious talking about Land's End: "you want good puff to get round there".

The poor visibility concerned me. My decision making would be based on a "go by what feels right" strategy, principally based on what I could see and what I could remember from the maps and tide/weather information I'd studied before setting off.

Still, wind strength was spot on as I headland hopped upwind, somewhat blind, towards Land's End. GPS informed me of distance to go.

I registered Porthcurno as a potential retreat. Could I have got in there?

The sea was getting gradually lumpier, but nothing too concerning.

Suddenly speed was picking up. Very soon I was in it - whatever "it" was - this thing I had to get past. I told myself "you wanted this mate!".

The saving grace is that I had wind and could head up into the lumps. I got sideswiped but stayed on.

I picked a line inside the first set of rocks. Further out looked worse, and getting downwind was going to be the real problem.

As the tide swept me past a ("The"? Land's End?) headland my required course became broader, the wind lighter, and sailing more unstable. Major exertion was required to stay on the board. I saw a ship way out to sea, the only other craft I saw all day, until near St Ives.

By the time I was off Sennen the south coast sea was behind me. I stopped (maybe I fell?) and emptied out seawater that had found its way up my drysuit legs [edit: this was an issue only because my drysuit was too big, I now have a correctly sized drysuit - thank you Gul - which is totally dry, tested sailing across the Bristol Channel]. Sennen has a harbour and was a theoretical stopping option. In reality with an 8ft swell, near zero wind, strong current, high cliffs and rocks - it most definitely wasn't.

Sat on my board I checked the GPS. I was doing 3 knots, going the right way. Good. I set the GPS for St Ives. 12nm. Snickers bar. Get going.

An island was ahead. There looked to be a route inside but as I neared it looked more unsafe. I headed outside. Big waves were unloading on the reef on its west face.

Immediately after the island there was another race. A layer of spikes was added to the undulating and pitted seastate. Wind in the sail was zero. It was very difficult to stay on the board. I pointed higher for some stability until the spikes were replaced by upwelling water.

Confident I was now on the North Coast proper I took a break. I had a mobile signal and brother Gregg was back from his hols. It was good to share my difficulties. Gregg confirmed landing options before St Ives as likely none in this size swell. A puffin flew past. The colours of its bill a welcome contrast to the greyness.

The fear now was of not making it to St Ives before the tide switched, and with no wind about being taken back to Land's End. If this happened perhaps I could hold on to a fishing buoy? Maybe. The few I'd seen were being pulled deep underwater as the Atlantic swells rolled through them.

The next few hours were some of the most difficult sailing I've had to endure. Movement was confirmed by GPS and progress, but could not be sensed. The white noise of waves on cliff the only sound.

The GPS was swinging around too much to read, but when I held it still (holding boom and GPS) I saw that on the downhill of the swells my speed would reach up to 7 knots, and on the uphills it would be down to 2 or 3. I guess the swells also further reduced the wind at sail height.

This was the most uncomfortable and difficult windsurfing I've done. Only for the last mile or so did conditions get easier, as the bend in the coast offered some protection and gave some angle to sail at.

I think I was at sea about 7.5 hours. Conditions were psychologically and physically draining. An hour after landing at St Ives I found myself in a tea shop and cried

That's one sail I won't be repeating, and I wouldn't recommend it to anyone.

The wind looks good now but it seems sensible to have a day off. I'll be on my way again tomorrow.