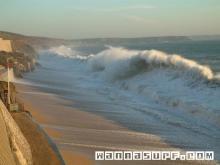 As I’m putting this update together Jono has launched from Marazion and is heading around Lands End. The weather is good, at least it looks good on the internet, a force four from the west that should stay around all day, giving a beat out to the end of the South Coast, a reach past thousands of bemused day trippers on Lands End itself, and then downwind back up the north coast of Cornwall to (probably) Hayle.

But from piecing together the minimal bits and pieces of contact I’ve had with him since Thursday I’d say he’s doing so slightly fazed by the experience of coming into Porthleven two nights ago. An experience which highlights the dangers he faces on a trip like this.

Just off Porthleven’s harbour the reefs and ledges provide a base for arguably the UK’s best surfing wave, and fiercely protective local surfers make their lives around it, sharing the small isolated village with hardcore fishermen. There is a beach, but its strong currents, the scars of rocks running through it and the booming shorebreak do little to bring in the tourists you might associate with a picturesque Cornish harbour, the southernmost in the UK.

I happened to visit once, when the wave was working, and was struck by two things. One, it was the sort of surfing wave that was then, and will probably forever be, well beyond my level. Two, I wouldn’t want to be landing on that beach the other side of the harbour wall. Actually and three, as an obvious surfing wannabe in my VW camper van, I felt unwelcome eyes on me from the locals on all sides. This is a little part of Cornwall the locals keep to themselves.

So when I watched Jono leave the shelter of Coverack fairly late on Thursday evening to head around the Lizard headland, I had a fair idea that he might have misjudged how difficult it would be to come safely ashore until, well until he got into the shelter of Penzance, or Marazion - some twenty miles along a lee shore. Praa sands, the only friendly-ish surfing break (at least its a beach) on that stretch of coast was reporting 4-7 ft waves, which is big enough to send most surfers elsewhere.

He says that rounding the Lizard was no problem, and he stayed well out to sea, but was immediately in big rolling Atlantic swells, and could see waves smashing into the cliffs on the coastline he had hoped to put in at. He sailed along in a fading light with his options getting very limited until reaching the lights of Porthleven. Here he saw surfers in the water either side of the narrow harbour, and waves breaking in the entrance. With no other options left he had to take a run at it, and made it in between waves.

He then says how the tough and insular people of this little town gave him a seafarers welcome, helping him up the harbour wall with his gear, thrusting a drink in his hand, giving him a meal, a hot bath and a bed for the night.

I wonder and rather doubt that anyone has ever windsurfed into Porthleven harbour before. I’m pretty sure no-one has alone, late in the evening with the surf up, having sailed around the Lizard. I suspect Jono’s entrance will be talked about for a long time in the taverns around the harbour, along with other tales from the sea.

And I’m sure that Jono will gain experience from this step of the adventure which will stand him in good stead as he sails onward. He may even come back one day to surf the wave, and he may even be made welcome.

But for now, today should see him complete the south coast and begin the long trip northwards.