The Sound of Jura 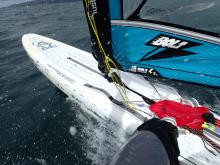 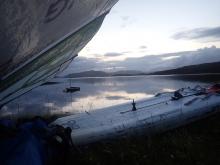 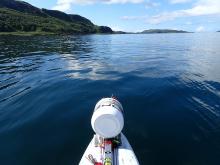 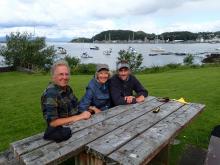 A very good day's progress on the sail out of Gigha (Thursday afternoon, having let a strong southwesterly moderate). Conditions were ideal for planing straight up the Sound of Jura so - as advised by my navigation team (I listen to every word, John) - I made hay whilst the sun shone. Before long I was approaching the upper reaches of the Sound of Jura, target the Sound of Shuna, but with only a hazy recollection of the route between the islands to get there.

Conditions were as required (good vis and reliable wind) for the 'living by you wits' approach to navigation, so I pressed on.

A seemingly continuous line of overfalls in the middle of the Sound got my attention. A transition zone between favourable current on the east side and foul on the west, I presumed. Whatever, I didnt fancy going over there so stayed right for as long as possible.

Also left and menacing even from a distance were the steep walls of the Strait of Corryvrecken. There was a lot of water going in that direction and I wanted to stay well clear.

I stayed in my north going current for as long as possible before the last crossing opportunity, between a jutting out piece of the mainland and a small island. Current was obviously racing through here. In I sailed and was immediately powered up as the flow shot me upwind. The currents tugged at the daggerboard. I said to myself "this is frightening". Once past the promentory at the start of the race and having powered through some quite major turbulence I found some calm in a countercurrent closer inshore.

The main flow of water was racing out towards Corryvreckan. The sun quite low and shining directly through the gap. I was a few miles away but in those moments the steep walls of the Strait were my gates of hell, to be avoided at all cost.

Once through that gap I turned sharp right. I was batting against foul current and stayed close in to the rocks to approach the next constriction. A quick charge at the water got me across and into the shelter behind yet another island. One hop to safety now. But quite a long hop. The wind held and once with striking distance of land in the Sound of Shuna I congratulated myself on another challenge negotiated.

I hit this section on neaps (most likely at the wrong time but neaps nonetheless). A bit more planning would be advisable on Springs...

Now chilling out in Oban, where my mum and step dad have come to visit. Light winds these last couple of days.

Heading up the Sound of Mull tomorrow.