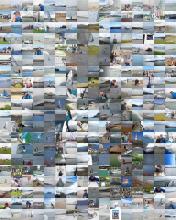 2015 was a very good year in the life of Jono Dunnett. To those who helped make it that, thank you does not really seem sufficient. But insufficient is better than unsaid - so here goes...

This first list is of the Local Contacts who stuck a pin on the map at windsurfroundbritiain.co.uk. What nice people you all are. Thank you for your messages of support, willingness to make time to help out, offers (and - where I stopped - provision) of food, shelter, transport, local knowledge and more. What was really touching was how genuine you all were and how undemanding of anything in return for your kindness. I only stayed with some of you, and didn't even manage so much as a wave to most of you as I sailed by, but you were all there, and you all helped me get round Britain. Thanks to:

Others offered their support as existing or through mutual friends, through email or Facebook, email, or you simply noticed the oddball homeless-type setting up camp under a sail: the Dover help, Clyde, Casey, Rod, Bernadette, Colin, Ian, Bella, another Rod, Louise, David, Maureen, Bangor and BYC, Gordon and the clan; Lisa; Adrian + brother, Lucy, Cap'n J Sparrow, Peter and Toby; Nicky, Hamish(es) and everyone else at Cove; Matt, Lucy, Emma, Chris; Richard in the middle of nowhere, Jeanetta, Turid and the Montrose first XI,  Kate, Jim, Kingsbarn campers, Sean, Filey SC, Alan, Tom, Trevor, June, Becky and team Sea Palling, Felixstowe sailors. Thank you so much for noticing.

Some of you - and your friends and family - really saved me at times when I was struggling. Some of you did so much more than I acknowledge here. I hope you have an inkling of who you are.

Thanks also to those who sailed or paddled out to see me. There weren't very many of you, it was always a pleasure to see you, and your determination to cross my path was touching.

Thank you to these companies for their unwavering support: Tushingham, Viking Renewable, Gul, YB Tracking, Olympus, Standard Horizon, Aquapac, ACR Electronics, Mobile Solar Chargers, Cascade Designs, Vibram Fivefingers, Direct Storage, Aquafax, Universal Display. And thank you to all the individuals at these companies whose enthusiasm was so infectious and motivating.

Thank you to those who donated and to the messages you left. The pancreatic cancer charity and Tanzanian orphans and widows charity have both personally thanked us for our combined efforts

Thanks to all those who contributed in other ways and to anyone who I should have included in this post but didn't.

This really is the last windsurfroundbritain post. Best wishes for 2016, friends.

(Regretfully I don't have pictures of everyone I'd like to thank - those who appear in the composite image are a subset only. Also, apologies also for the excessive repetition of the guy in the blue suit.)