A word on the tide 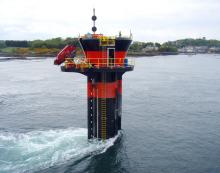 I thought I knew about the tide. There’s either lots of beach cos it’s low tide, or no beach cos it’s high tide. It goes in and out twice a day and it all happens because the moon’s gravity pulls the oceans around the world in a big bulge. Sure there are some subtle considerations an experienced water sports enthusiast might allow for - bigger waves ‘on the push’ (a rising tide), the value of putting your gear above the high tide mark if you want it to still be there after lunch. One aspect of Jono’s trip that I didn’t anticipate was how it would reveal what a one dimensional understanding of tides we tend to get from the beach (and how little I actually knew). Jono is in Mallaig today doing some running repairs to his board, and I’ve decided to use the tricky next step in his voyage to try to show how important and fickle a character the tide is on a trip like this, and how vital it is to predict and plan almost every day around its comings and goings.

When the tide goes out at a beach, the water doesn’t just flow directly out to sea and chill out for a while until it’s time for high tide. It has to go somewhere, and in so doing it joins other water on the move from other high and low tides. Coastal waters are actually made up of endless and ever-changing flows of water, like a giant network of rivers. They’re pulled from afar but like naughty schoolchildren they squabble, pushing and shoving each other constantly. The shape of the coastline and the ocean bottom interfere with these flows further deflecting and disrupting them, sometimes violently. It’s all on such a giant scale that we can’t see it, an invisible drama played out twice a day. Then there’s the weather on top of it all. Throw in the possibility of swell coming from the deeper oceans. The sea is constantly on the move.

For a recreational windsurfer it doesn’t matter too much. We mostly sail in bays where tidal flows are at their weakest, hardly perceptible. We typically sail when its windy giving us the speed and power to barely notice half a knot of tide running underneath us. Jono by contrast might begin from a bay, but has to sail around nearly every headland on our coastline and through the channels between islands and the mainland. It’s here that the real tide happens and the speeds increase dramatically. An ‘average’ headland, if such a thing exists, will see tidal speeds of 4 or 5 knots, this is the speed the average person jogs at. Some more notorious headlands are feared because of faster speeds. Portland Bill sticks out 20 miles from the south coast into the channel and the obstruction accelerates the tide up to 7 knots, about the top speed of a typical yacht under power. The fastest tidal flows in Great Britain are still to come for Jono. The north east corner of Scotland (around John ‘O’ Groats) sees tidal flows as high as 17 knots on spring tides.

A tide going Jono's way can speed him up, but battling against one will slow him down. If the wind is light and his speed through the water averages 8 knots (8.8 mph) but he’s assisted by 2 knots of tide, then he’s travelling 11 miles each hour. If the same tide is against him, suddenly he’s only travelled just over 6 miles. Over the course of a day the differences are big.

But what the tide does to the water state is a more urgent consideration. Out in the open, tide with wind (both travelling in the same direction) gives a much smoother, easier sea state to sail through, even if the wind is quite light. Rub tide and wind against each other and the water surface is roughed up too. It feels windier too, in fact, it is windier because the surface Jono is on is moving towards the wind, meaning it flows faster over his sail. But it’s those headlands and narrow channels again where things get interesting. The increases of tidal speed are accompanied with an increase in confusion and disturbance to the water surface. Overfalls and tidal races are areas of the sea (sometimes vast areas) which throw up breaking waves from nowhere, whirlpools, boils and eddies, flows which dive down into the black depths. This is the very definition of chaos theory, the contents of billions of swimming pools smashed together as they’re squeezed through bottlenecks and past snags of land. To a casual glance it might look similar to the wave beaches and breaks windsurfers sail on, but overfalls lack the order and rhythm we rely on to make sense of it all. If a race or overfall is exposed to ocean swell however, then this merely adds more madness into the mix.

Amid the violence and chaos there is a time, usually twice a day, when everything calms down and slows to a halt. Slack - at high or low water, is when the flows have gone as far as they will, but there isn’t yet enough pull to throw the machine into reverse, like the moment a tennis ball will hang in the air when the force you’ve used to throw it up is exactly matched by the gravity which will pull it back down again.

We tend to think of a bottleneck as a place where things slow down - too used to the traffic snare-ups of the daily commute. In nature they’re places where things speed up, a rocket engine is a bottleneck, where burning fuel is super accelerated through a tiny gap. Jono’s next challenge is to pass through the bottleneck between the island of Skye and the mainland of Scotland. It’s known as Kyle Rhea. The coastlines are shaped like a funnel, drawing the Atlantic tides in and then accelerating them towards and, like a swirling, raging river, through a gap just one third of a mile wide and several miles long. At high water the tide runs north to south through the channel, reaching 6.6 knots until the channel widens. Here back eddies run south to north and form a whirlpool in mid-stream, but this is the turning of the tide. One hour later the flows have weakened, two hour later they’re reversed, now flowing back north, only now the whirlpools have moved and multiplied where new back eddies rejoin the main flow. The next three hours see the fastest flow of all, reaching 8 knots in the narrowest part of the channel. At high water plus five hours, the flow directs everything in its path north straight towards the biggest whirlpool of all.

There is no slack here, the quantity of moving water is too great, the channel too long. But for a northward travelling windsurfer there is one hour in every twelve hour cycle when things don’t look too bad. The hour around six hours and fifteen minutes before high water Ullapool is the chink in the armour. The tide is moving north, but it’s not too fast, the whirlpools have retreated temporarily, sulking just under the surface. If Jono can shoot through the tightest couple of miles during this hour he can ride the increasing tide through the rest of the channel.

A huge part of Jono’s routine is to first understand the coastline he must sail each day, to identify where the tide has to be respected and where he can rely upon his board speed and fair winds to see him through. And once afloat he can’t take a look at the chart to check his calculations, he must decide his route based upon the wind and then commit to it. The section described above is not regarded as a particularly difficult passage - although correct timing is essential, but I hope it helps to understand a little of the daily challenges that Jono is facing.